Birds in Flight was made with a pate de verre process using fine glass frit to make cast glass pieces.  I learned this process from Alicia Lomne.  Visit her website to see some amazing work using this process: www.alicialomne.com. 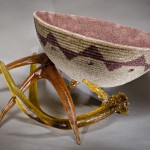 This bowl is inspired by coiled native american baskets.  Birds In Flight is a native american pattern that I adapted to this glass casting process.  The alternation of the orientation of a triangle seemed like such a simple pattern but I needed to dust off my geometry to get the triangles to fit the circumference of the bowl correctly. The last triangle in the circle needed to be pointing down to match the first triangle which was pointing up.  The Birds in Flight pattern has many variations, the more complicated the design, the more sophisticated the math. Native american women basket makers had to understand the concepts of geometry to weave these patterns.  Art loves math and math loves art.  Here is a google book reference if you would like to read more about native baskets and their patterns.  I especially liked this one because it features California native baskets: Illustrated History of Native American Baskets and Plates published in the early 1900’s.

This is an abbreviated description of my process to create this bowl but I hope for find it interesting. 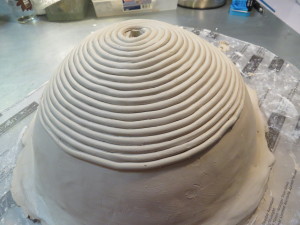 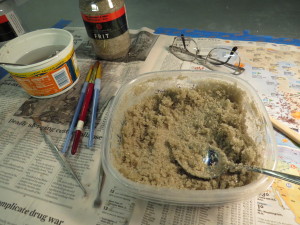 I used Bullseye fine glass frit for this process.  The glass frit is mixed with water and gum arabic. I used Light Bronze and Deep Plum for the outer layer of the bowl.  I lightly drew my pattern on the plaster/silica mold and started loading a thin layer of the frit onto the bowl wall.  The first layer of of frit will be the outer side of the bowl. 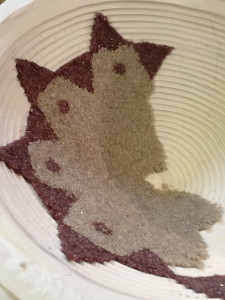 The second layer of white frit you can see below on the right side of the bowl below.  The white frit layer completely covered the first layer shown in figure 3.

The third and final layer of frit was Deep Plum and Light Plum.  I am starting to load this third layer on the left side of the bowl above.  Once all three layers have been added, the bowl is fired in a kiln.  This process heats the glass and melts the small grains of glass to form a hard surface.  Firing the kiln to different temps can alter the look of the bowl surface.  I used the sugar fire temp which is call that because final surface looks a little like fused sugar crystals. 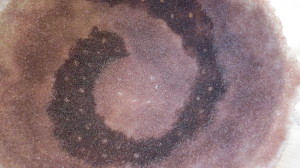 My inspiration for the pattern on the inside of the bowl was Van Gogh’s starry night.  Scientist theorize that migrating birds use the night sky as one of their tools to find their way to the same nesting and wintering areas each year.   This seemed like a good choice for the Birds In Flight pattern on the outside of the bowl. 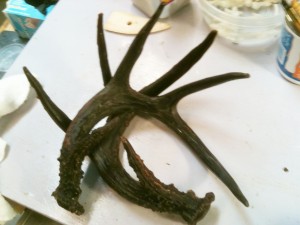 I only have a few pictures of the steps I used in making the antler stand.  But here is a short summary of the process.

To make the antler stand, I made a three part mold of an antler. I used “shed” antlers that I bought on eBay.   I then poured hot wax into the mold to get a wax model (above).  (Shed antlers are those “shed” at the end of each season by the bucks.  Someone in Minnesota gathered them in the fall and then sold them to me.)

Glass was then added to the cavity and the plaster/silica mold and glass were heated in a kiln.  The heated glass then melted into into the cavity taking the form of the antlers.  Bullseye Amber (left antler) and Rhubarb Shift (right antler) billets were used for these pieces. 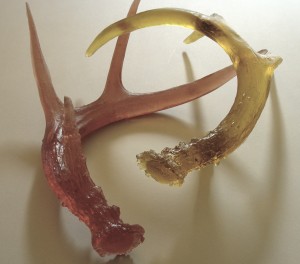 The bowls in this series are made using a pate de verre process that uses glass frit to build a thin sided bowl.  For a description of how these bowls are made go to “Project Notes”.   I learned how to make these thin sided frit blows from Alicia Lomne.  Check out her website at www.alicialomne.com. 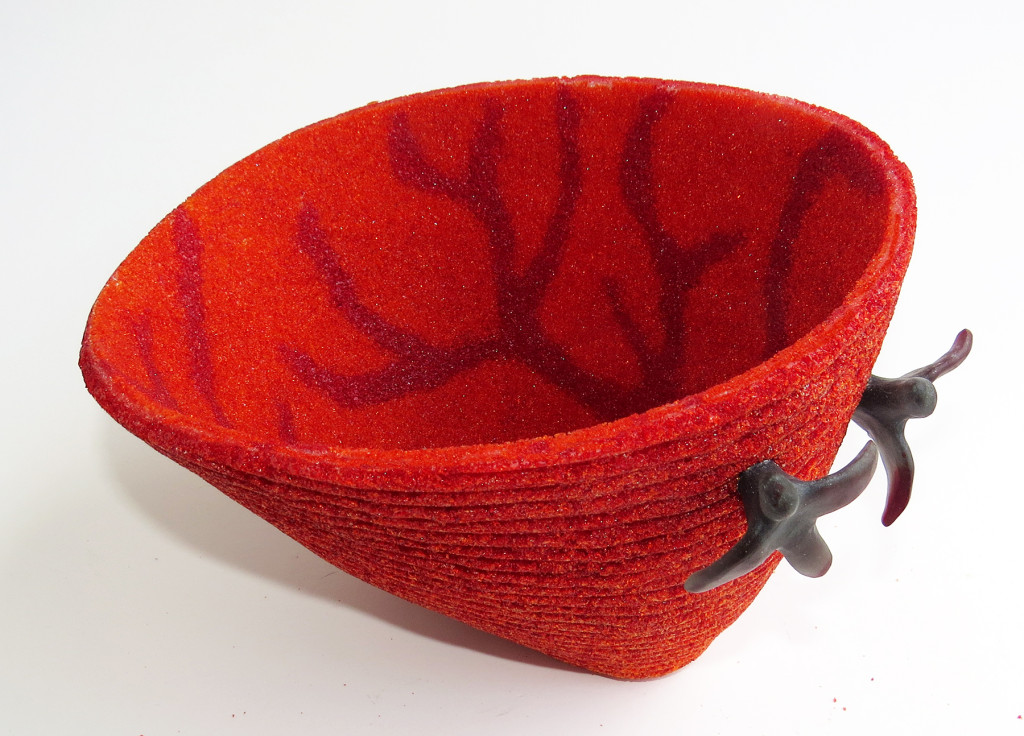 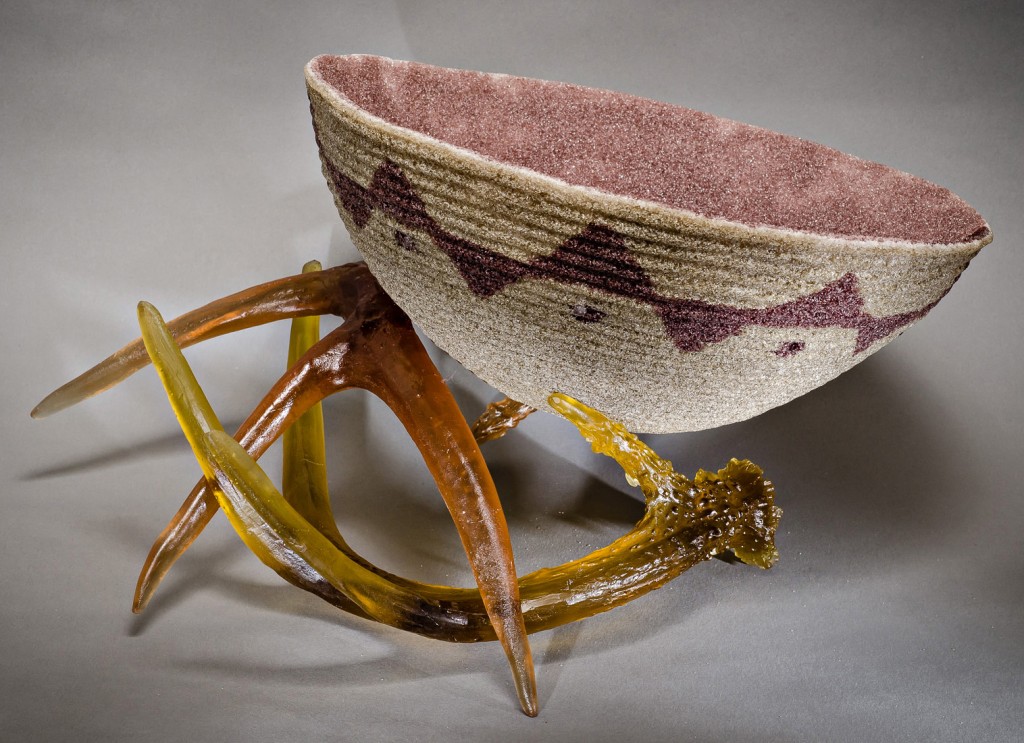 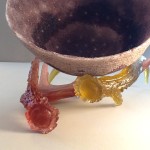 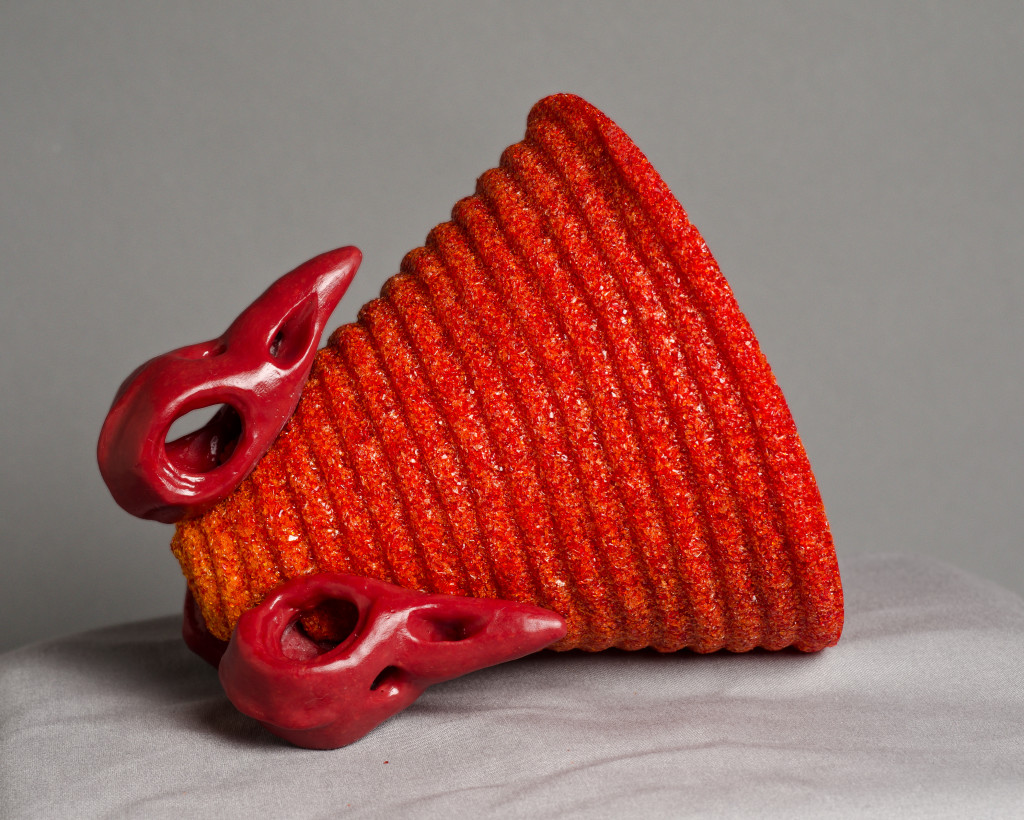 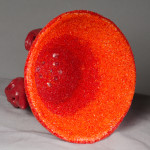 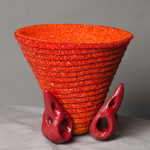